Exhibition as an Episodic Story

Colour Eating takes its name from Elvia Wilk’s sci-fi novel Oval, in which the changing colour of Berlin street lights is an indicator of the sustainability of life. Here, human experience is medicalised and capitalism spreads as a metastasizing dream of ever increasing production, higher definition, saturation and spectacle. Colour Eating explores the workings of such an emotional economy, moving between appropriation and distortion. The process of ingesting and eating art serves in the exhibition as a poetic and political device. Colour Eating takes the form of an evolving episodic story, playing with ambiguities of language and gaps in the narrative.

In the 1984 essay The Carrier Bag Theory of Fiction feminist writer Ursula K. Le Guin focuses on storytelling as technology that structures our lives and values. Le Guin’s poetic argument shows that in hunter-gatherer societies, stories of hunting mammoths became dominant. Much easier to tell than stories about picking strawberries, shells and oats, stories that included sticks and spears took over from ones of conserving and protecting, where the heroes were bags, pots and pans. Gradually doing away with the gatherer's egalitarian society, our violent domination of nature leaves the metaphorical potential of the carrier unexplored.

How can we move from weapons to carriers, as a narrative device and visual metaphor? What forms can these carriers take in an age of apocalyptic pandemics, the spectacle of Instagram, with our subjectivities co-opted by the pharmaco-technocratic culture industry? Turning away from the high-end production, often dominant in contemporary art, the artworks included in Colour Eating employ DIY methods, selfie culture and low cost means of working, partly as economic necessity, partly as a strategy based in the (eco-)feminist, queer and diasporic experiences of an emerging artistic generation.

Eliška Havlíková’s work revels in its own language, which releases itself from convention in queer poetics. Written as a diary, Hungry. For More moves between a highly evocative storytelling and the affective impact of colour, mixing downloaded material with the artist’s personal archive. Dystopic landscapes, violent scenes and coming of age stories are constructed in language and colour, dismantling and demystifying narrative conventions to their elemental basics, yet building feelings of elation and terror.

In the film Tình Cảm by Minh Thang Pham, language functions as an accumulation of connections, where authority is negotiated over a family dinner underpinning a generational and intercultural conflict. Performed as a father-son dialogue, it follows what might be interpreted as mutual intimate gestures of care or obscure intrusions.

The materiality of moving image is approached in the work Then He Stopped by Alex Sihelská, through animated, makeshift, luridly coloured forms spilling from the guts of domestic spaces. Repetitive movements such as the rubbing of hands, soil and grass over the body stages a space where sexual violence is contained as a memory affect, buried and concealed yet always building up and emerging through surfaces.

The concern with ’stories’ is also a reflection on the way they intertwine with self-presentation and personal branding on social media, algorithmically dictating visibility and invisibility of bodies and their politics. In her YouTube videos, Tereza Vinklárková questions sharing and influencer culture, adopting her alter ego of Gloriya Komarova. Grappling with ideas of participation and the refusal of labour in the image economies of social media, You Should Help It To Grow Too critically examines themes of ecology and its commodification.

Jan Matýsek builds on concerns with liquidity and performativity of gender through technological mediation. Toxic, slippery and disintegrating, his characters in I can be real as you can dream suggest unstable bodily boundaries, multiplicity and penetrability of the skin.

Drawing on aesthetics of Instagram filters and anomalous monstrosity the hypnotic pace of the voiceover is anesthetic and BOB LIFE documents Amalia Ulman’s encounter with an enigmatic pigeon who appears one day in her high rise corporate office in Los Angeles. Bob is Ulman’s silent companion, co-performer and prop, regularly appearing on the artist's Instagram between 2015 and 2018. In the transformation from Instagram to film, Bob tells his side of the story as an embodiment of traditional hetero-cis masculinity, detailing the ordeal of living in captivity with Ulman. In detailed closeups of Bob’s blinking, impenetrable eye, the imaginary roleplay problematises the ability to speak for or inhabit the lives of others.

How does this ability to name and to convey a story replay in encounters with non-human others? Inspired by therapeutic narratives and using tropes from the fantasy genre, the film who stole the speed lacks slowdown by Denisa Langrová considers the (im)possibility of interspecies communication through anthropocentric mantras of personal development. Nevertheless, as with other artists in this show, her work is a speculative story crafted as a means of survival. In its conclusion, the technoheroic of the weaponry is replaced by touch - the point of contact, Le Guin’s carrier that protects and heals. 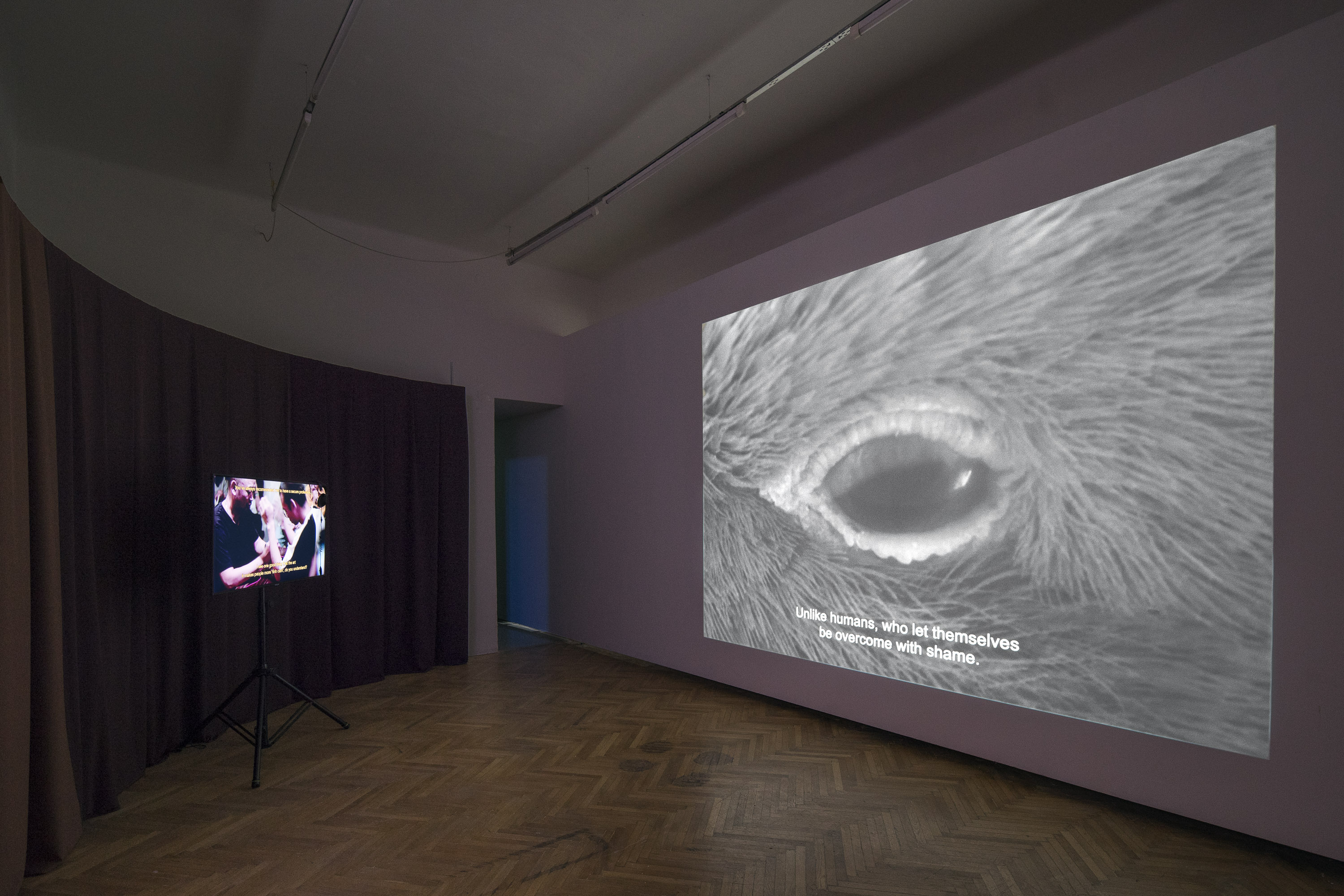 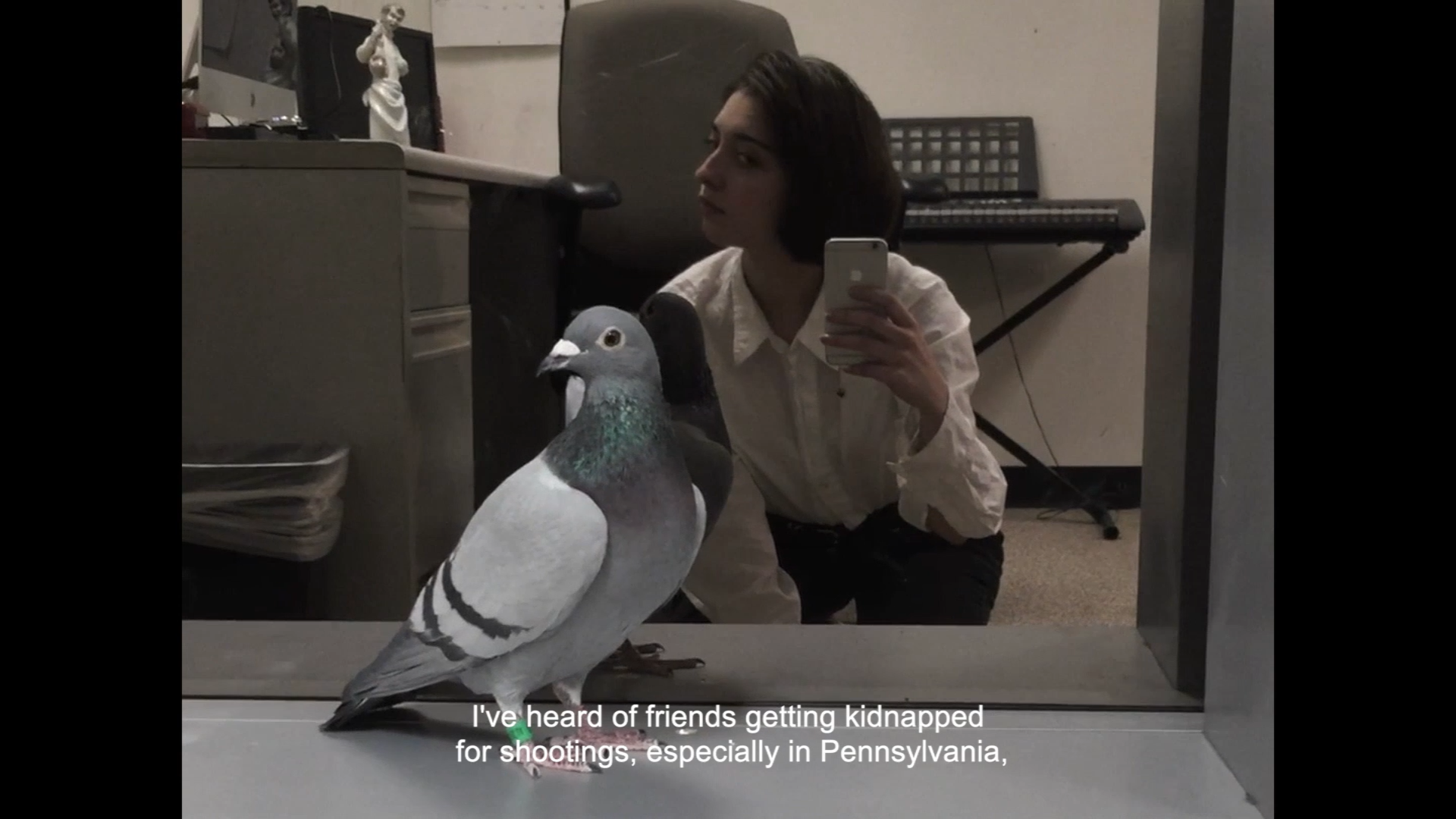 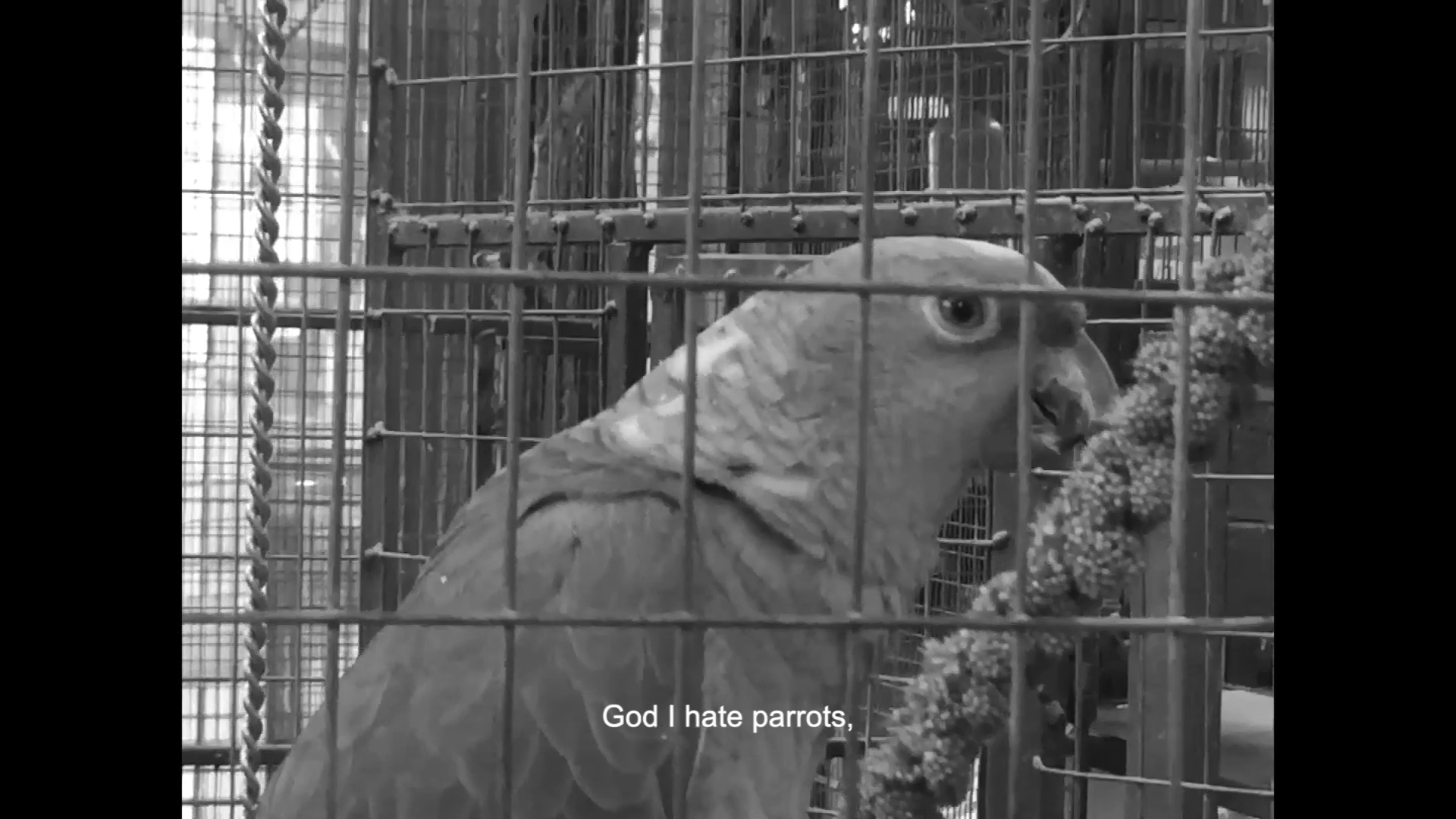 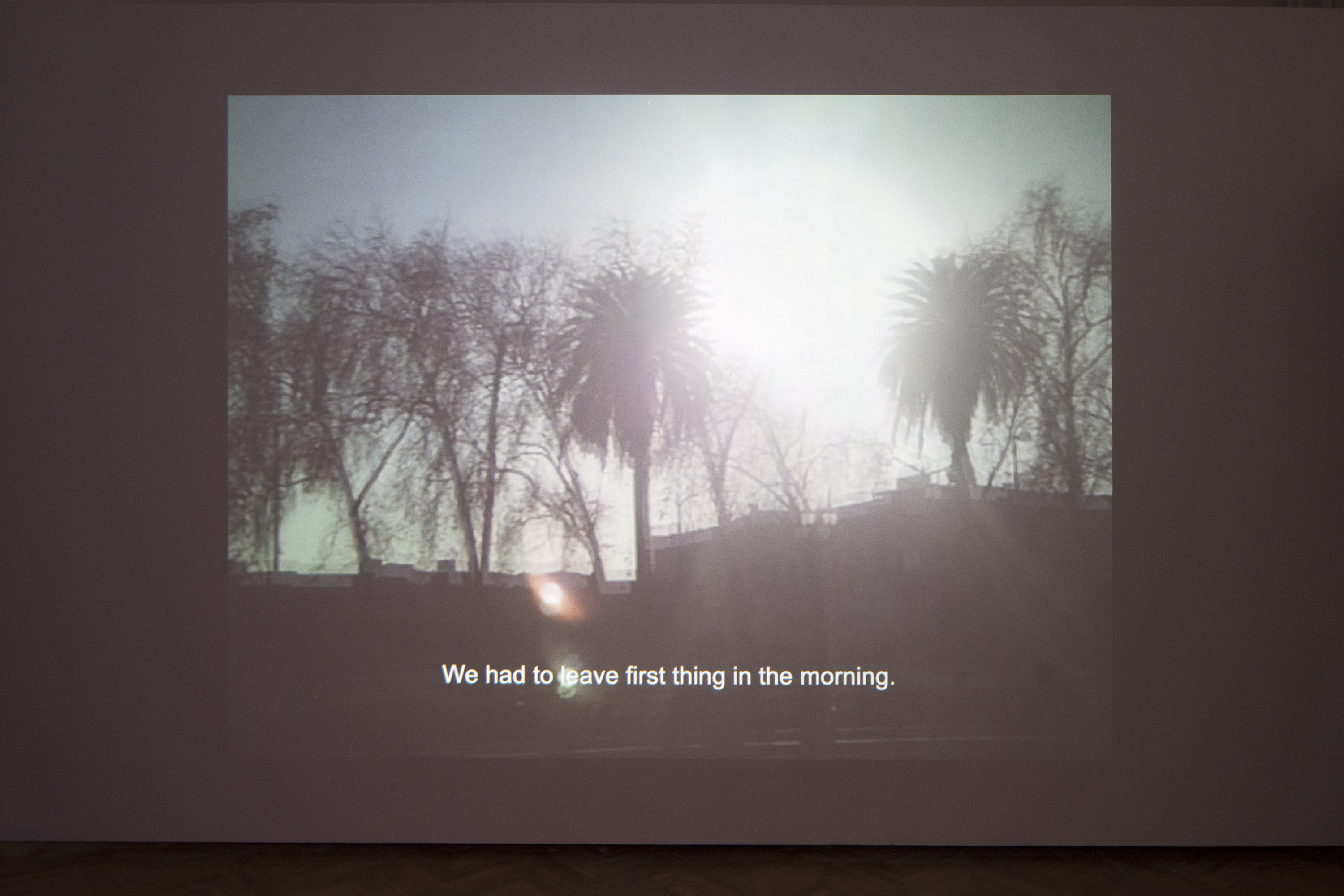 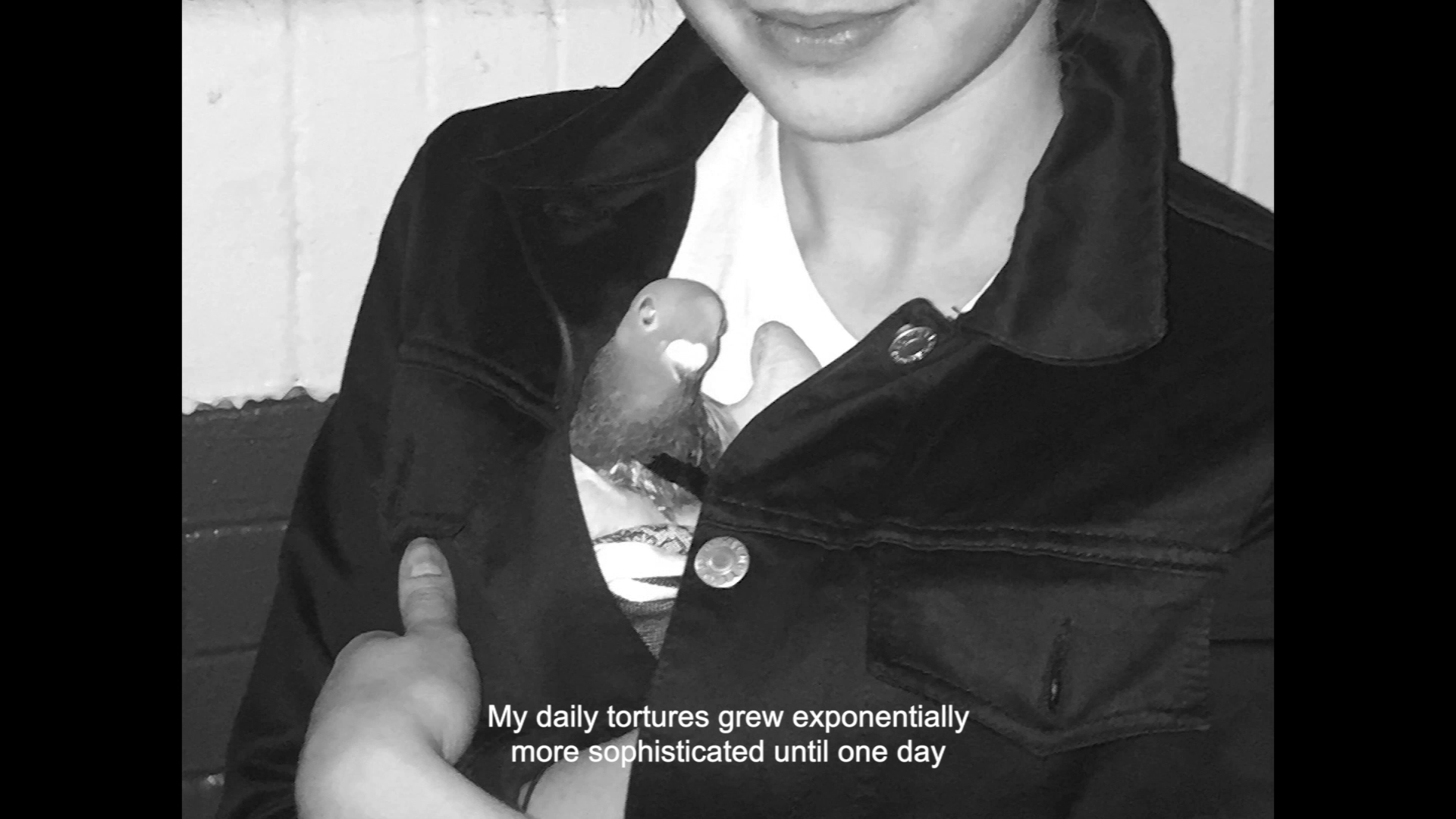 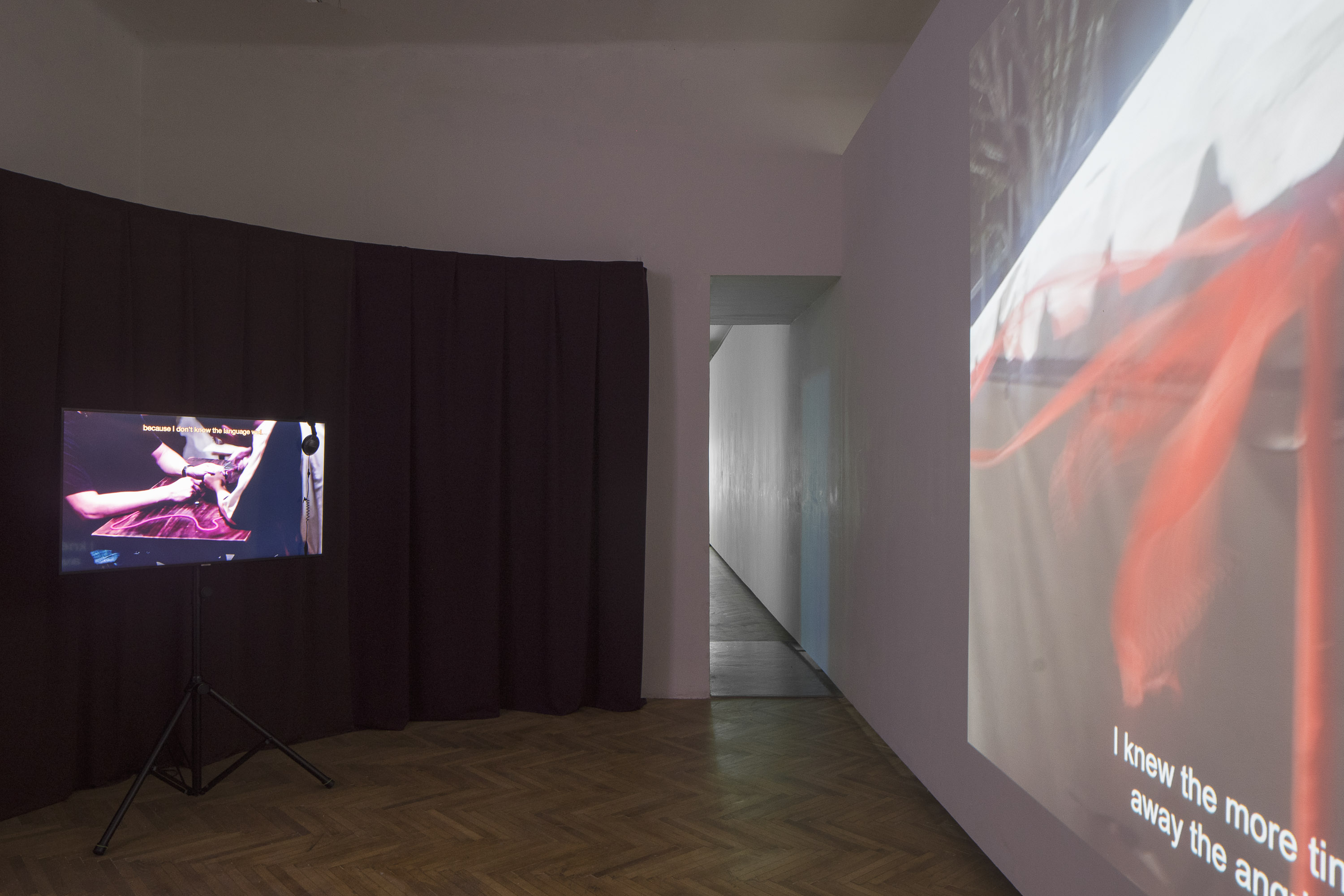 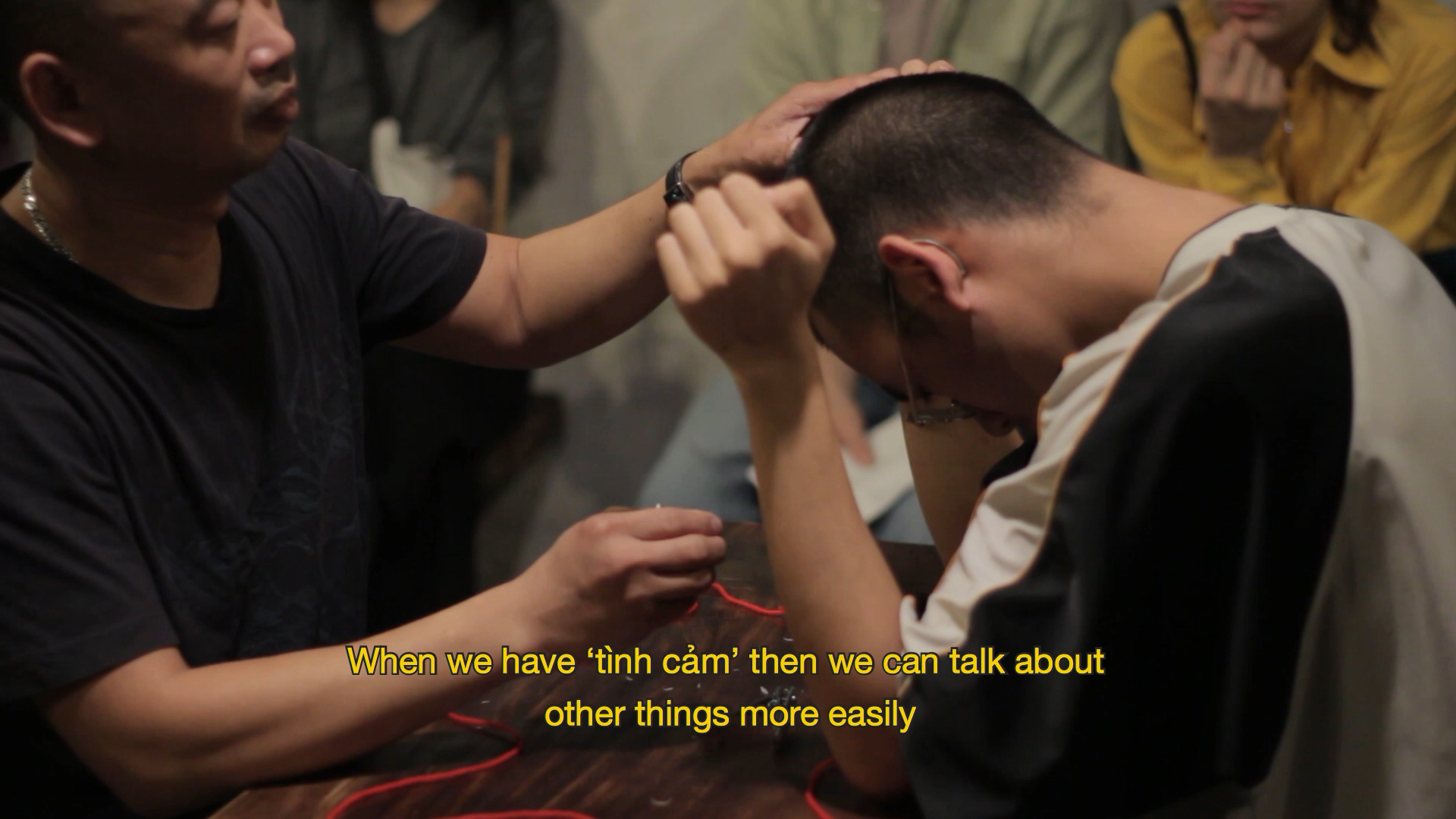 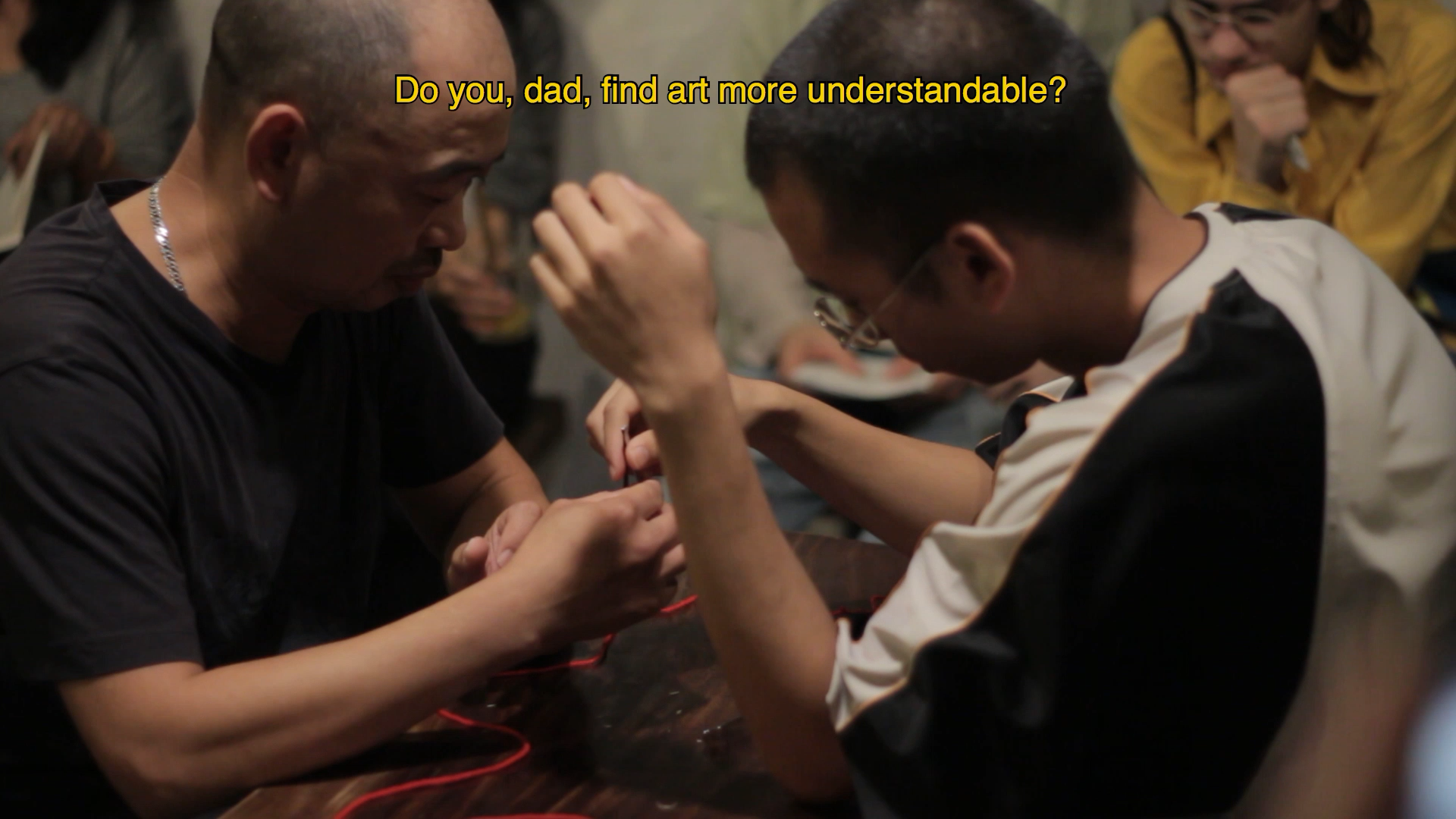 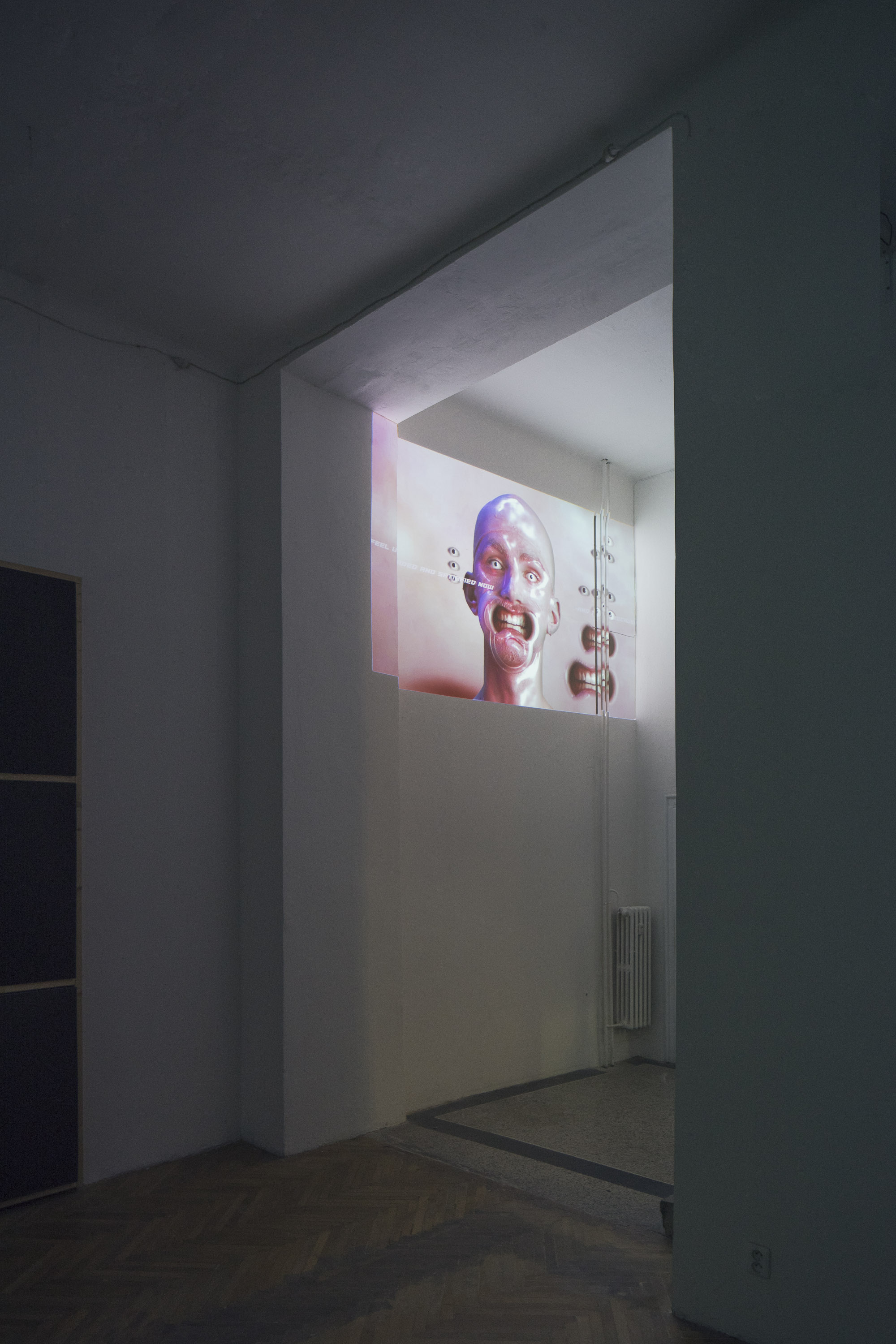 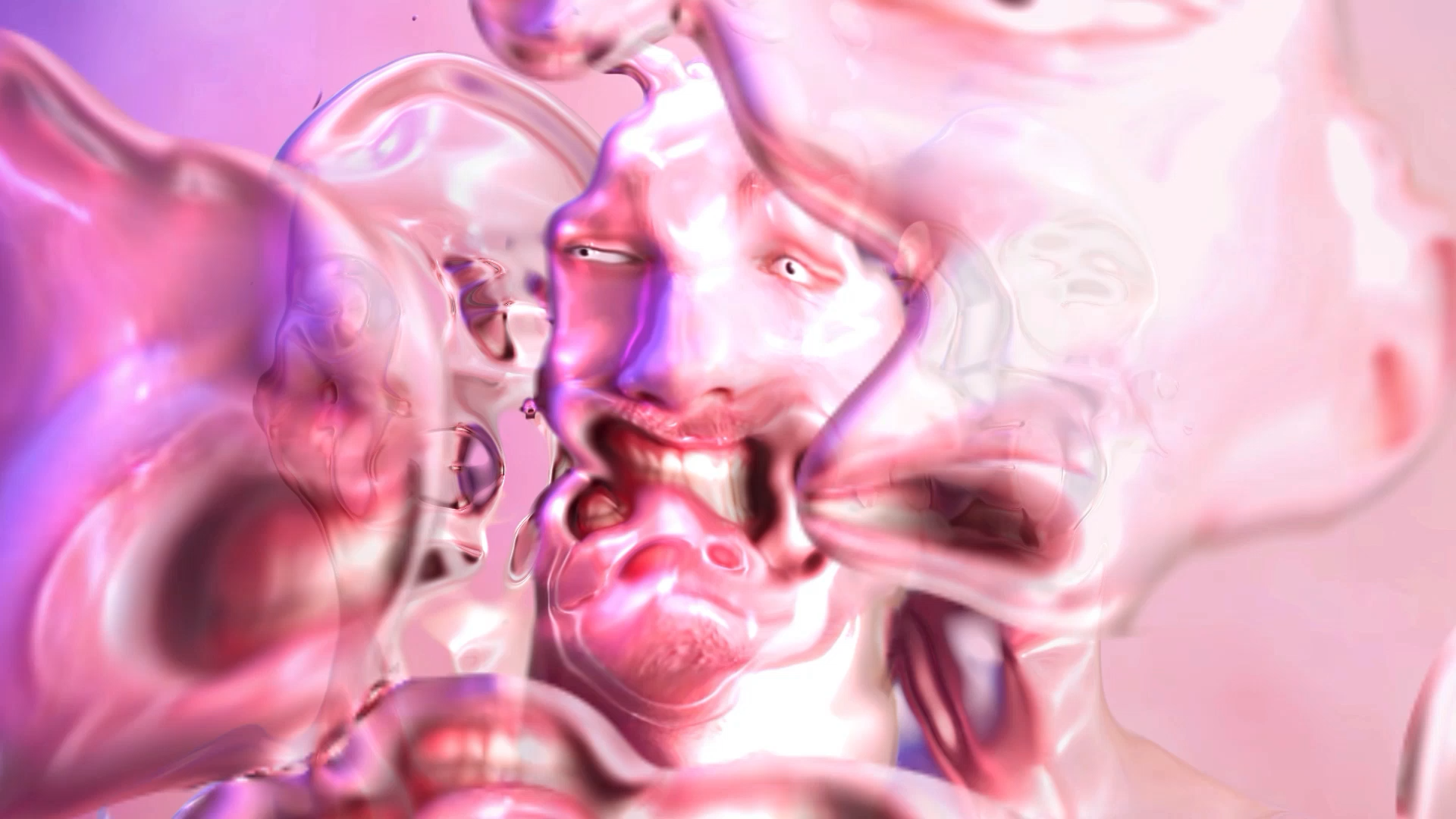 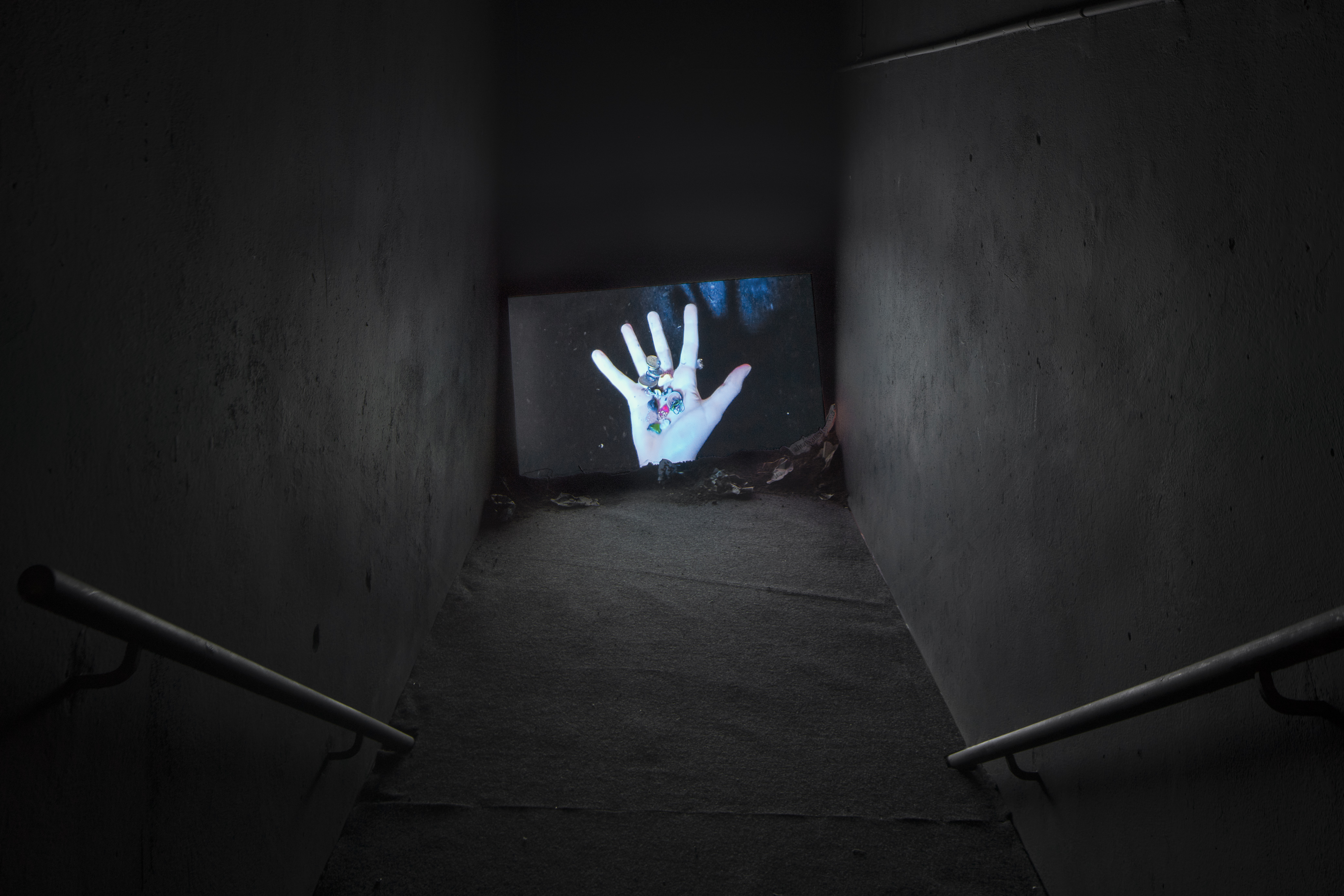 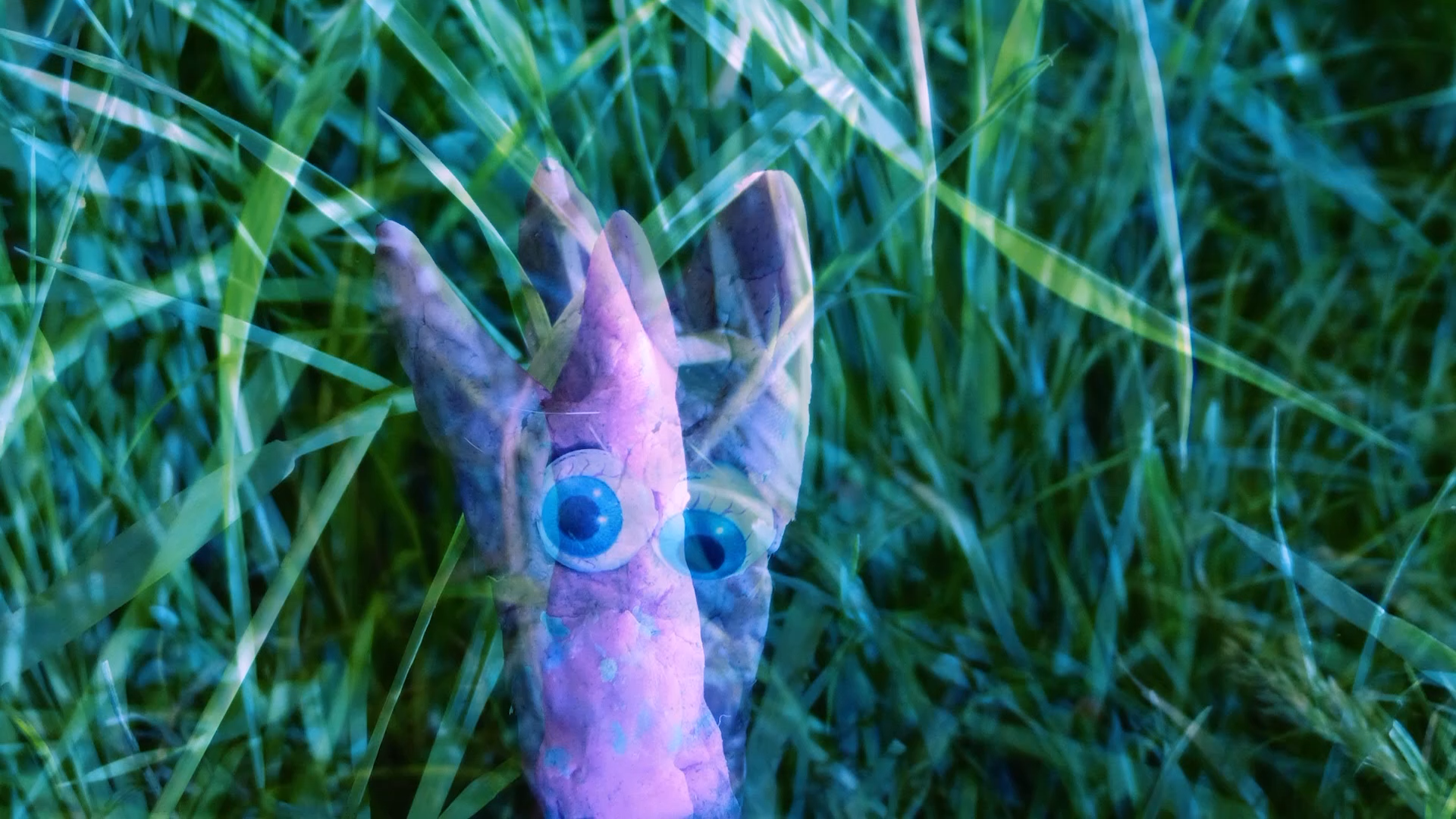 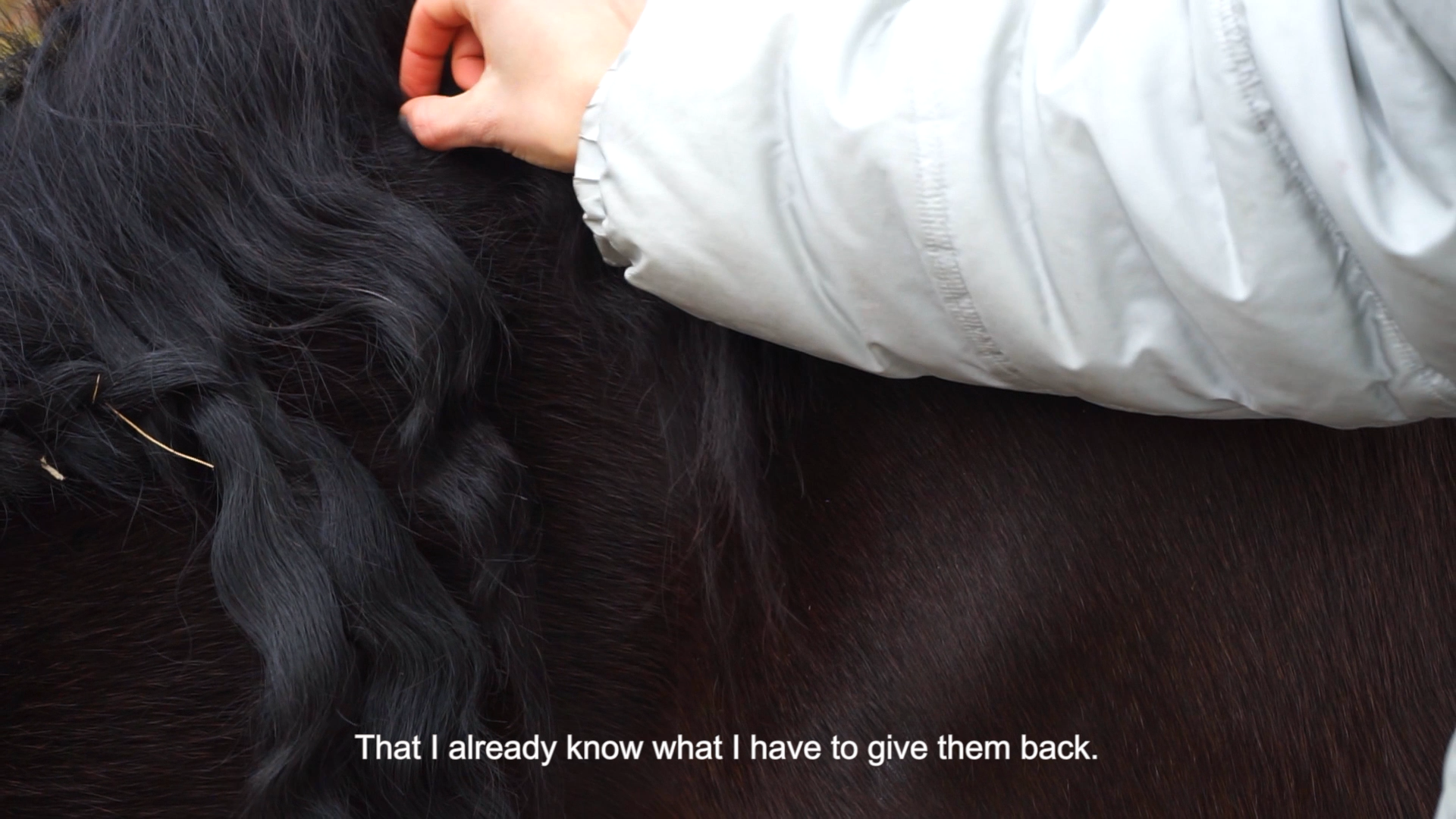 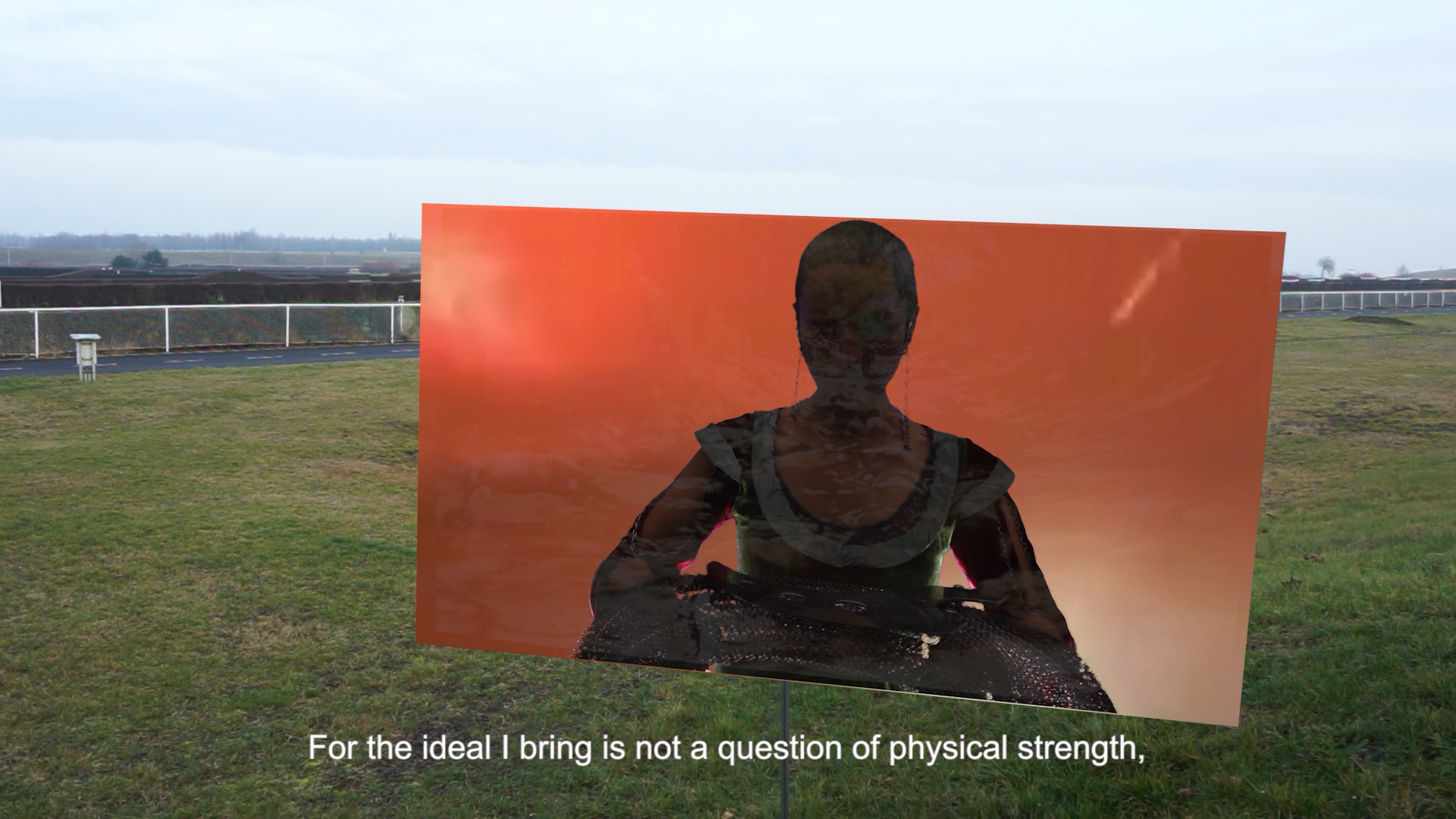 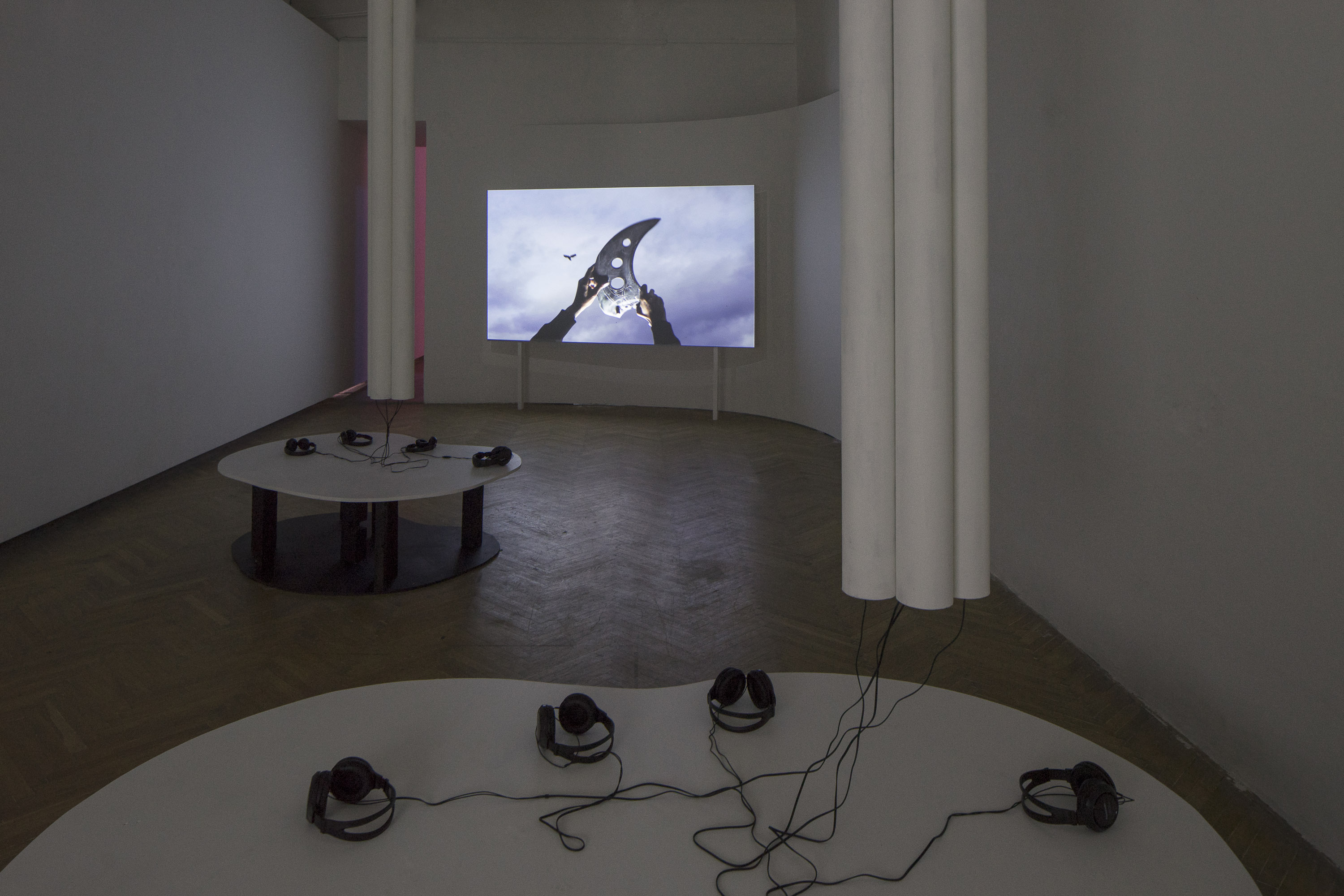 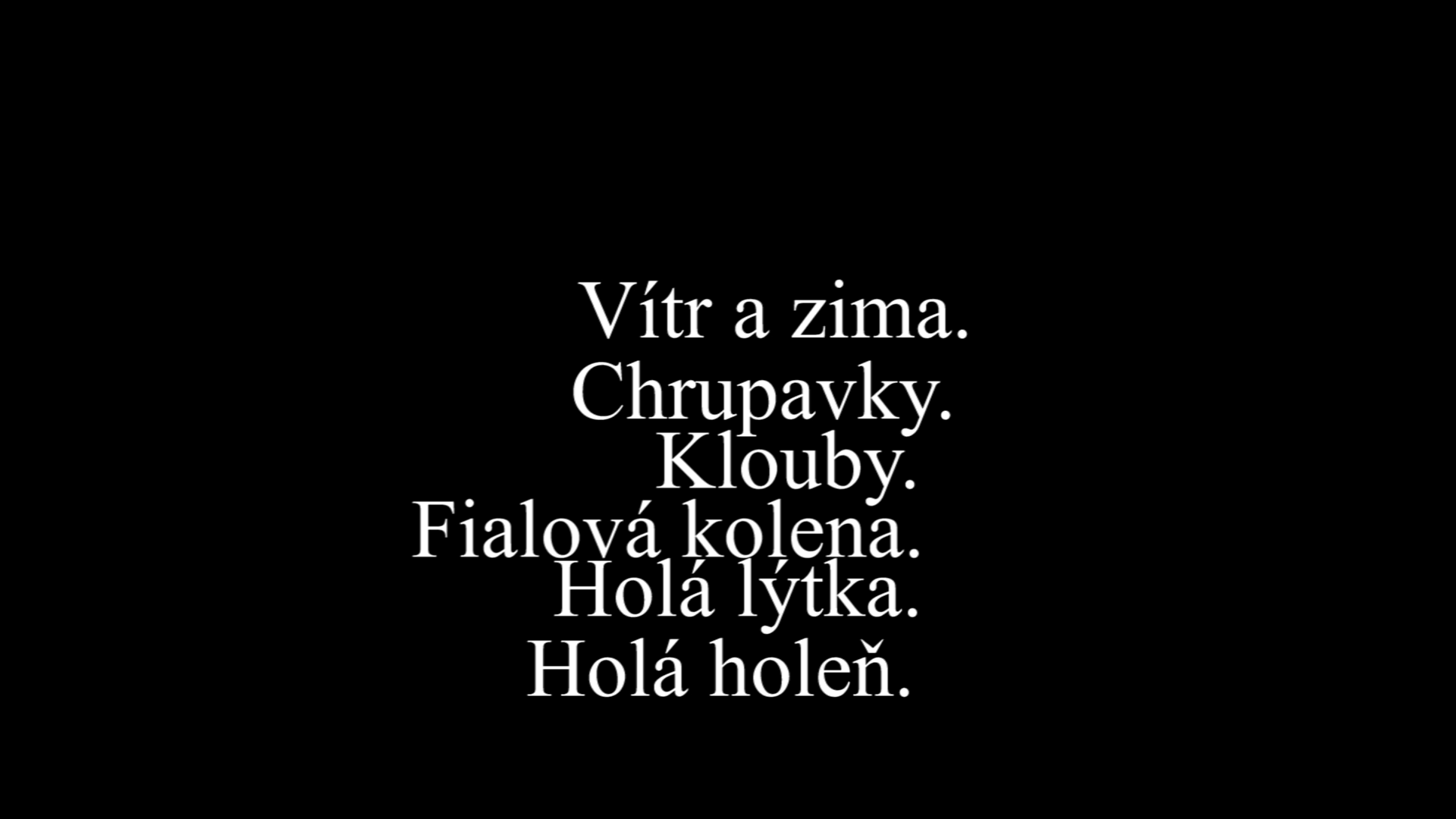 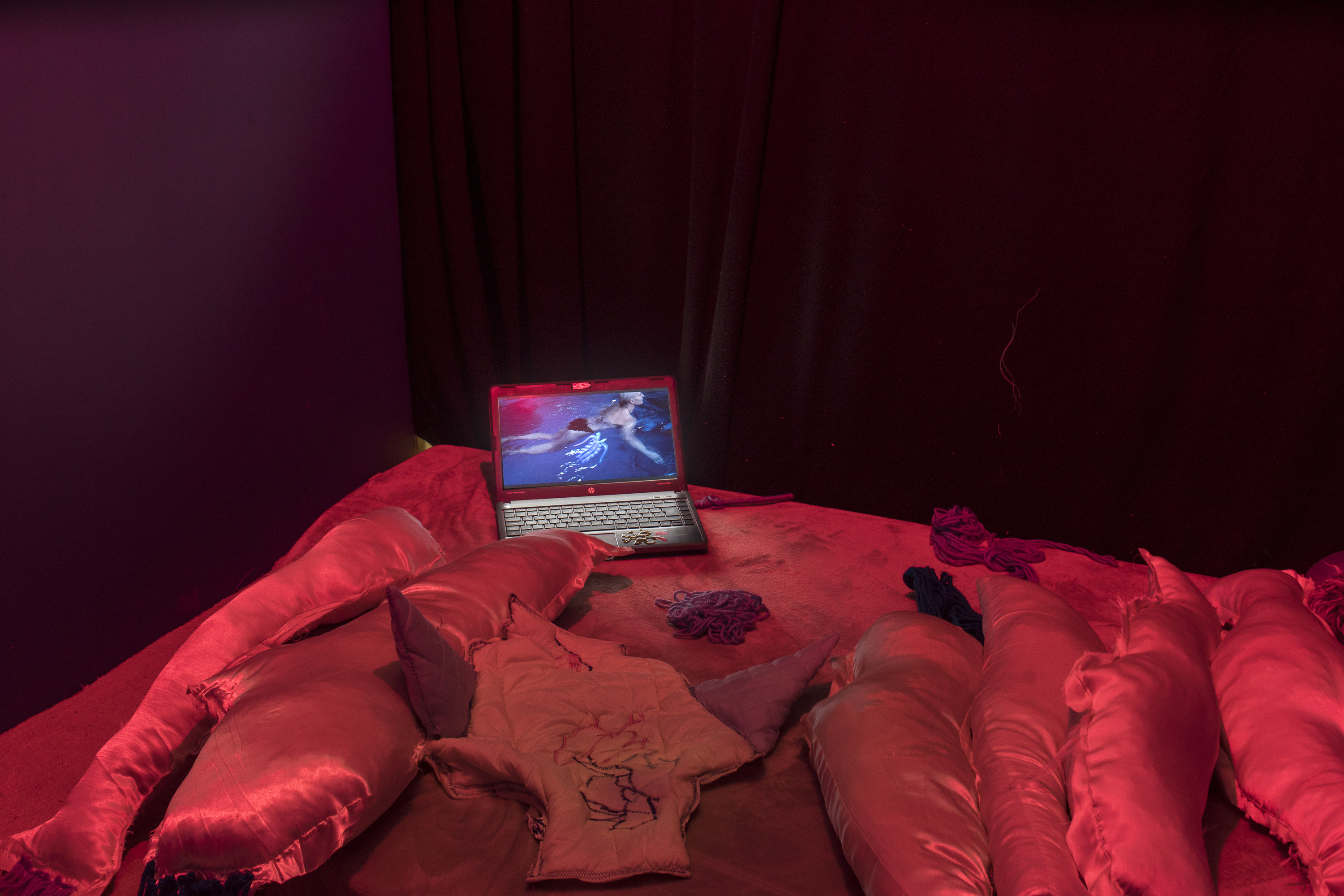 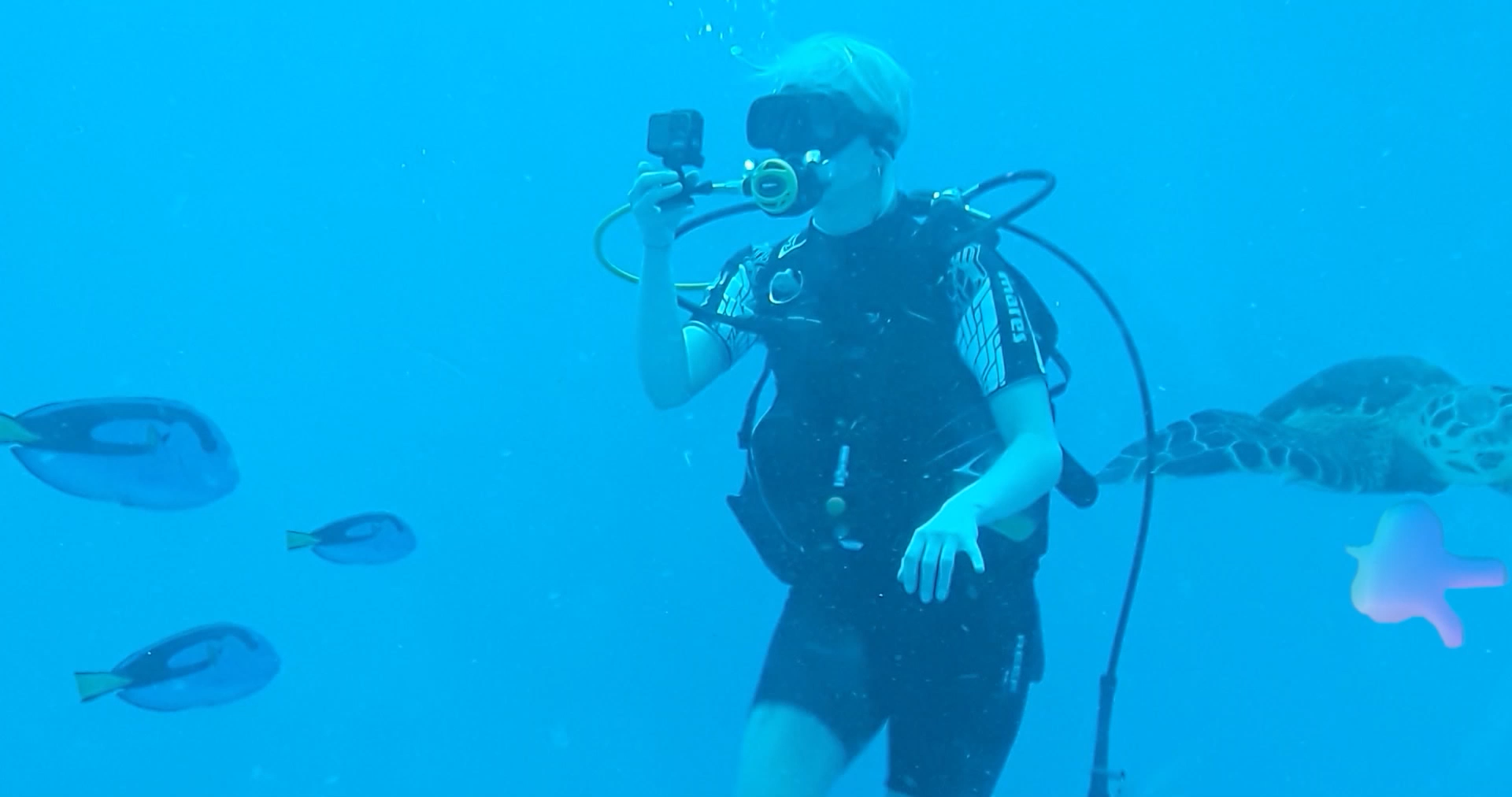 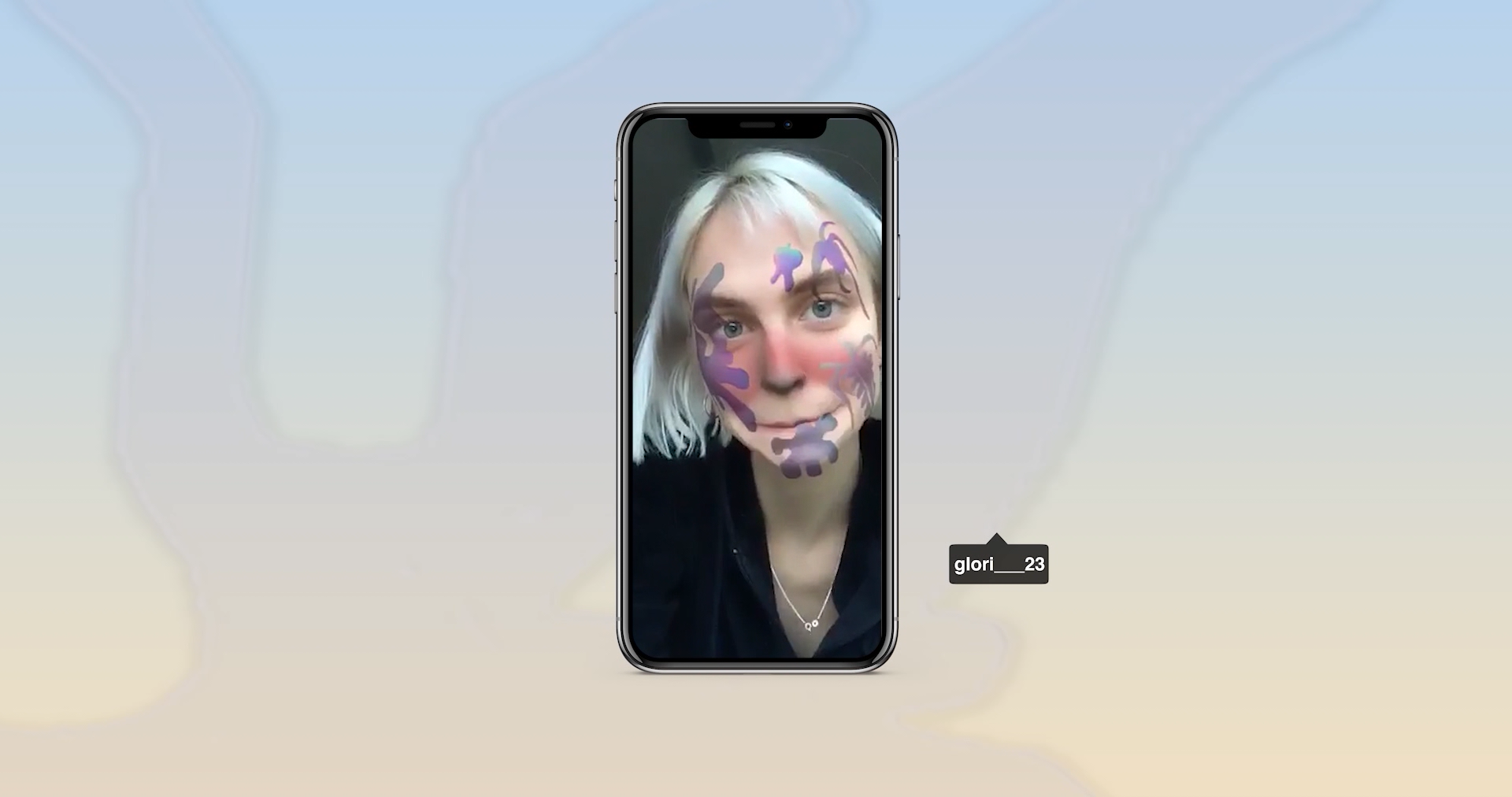 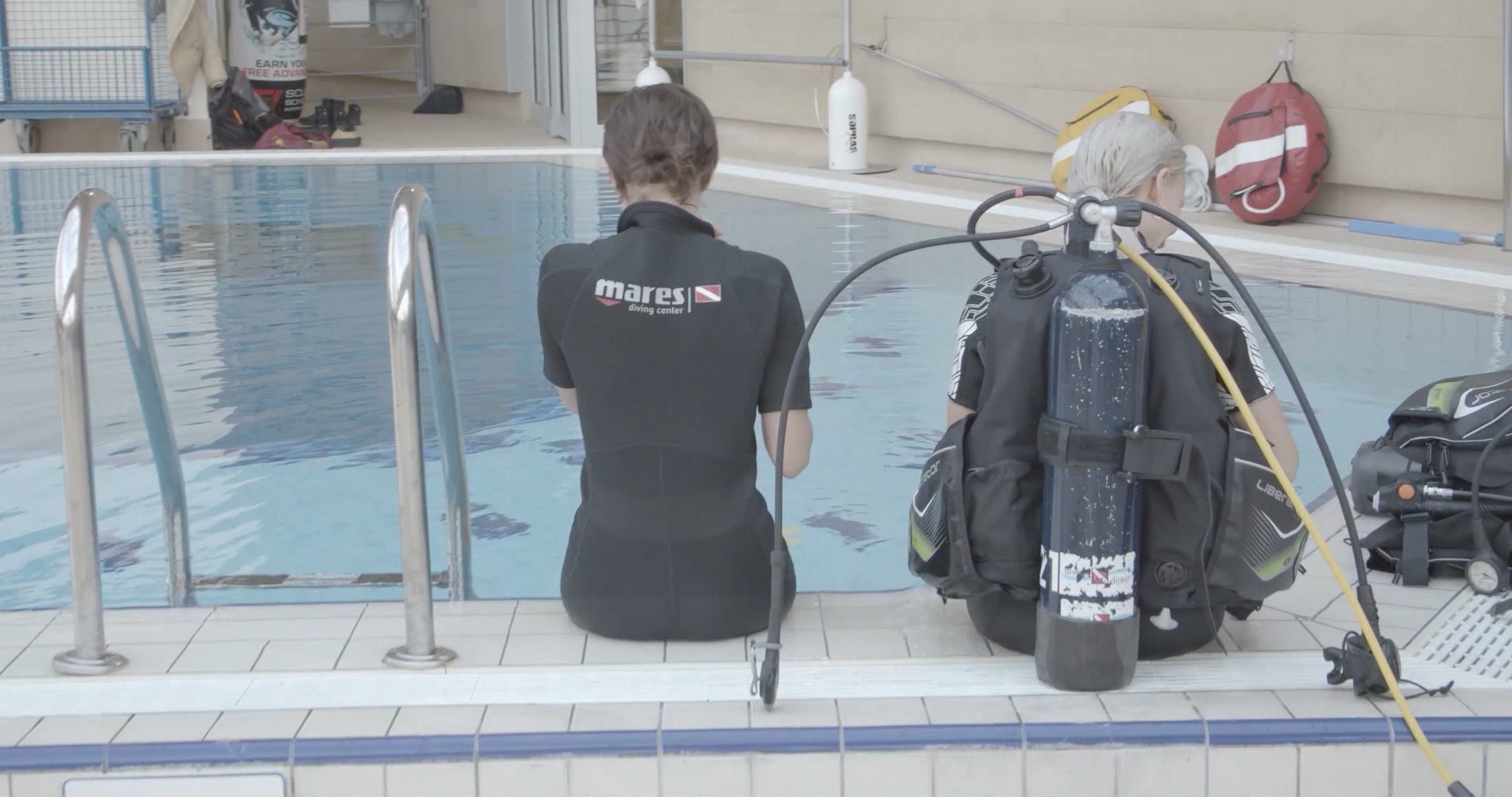